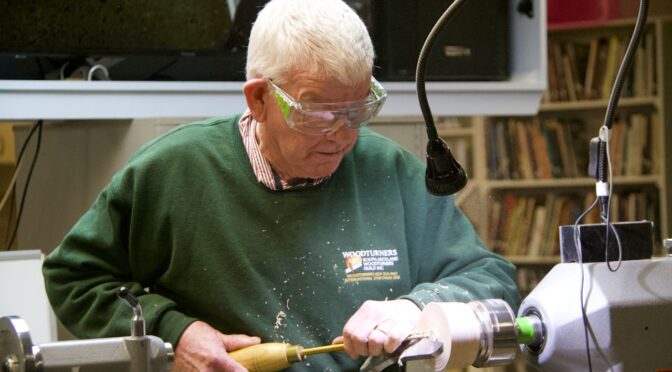 On Wednesday 23/06/21 at the Papatoetoe clubrooms, David taught us how he makes his beautiful butterfly boxes with finials. These are a treasure that I’m sure the receiver would love.

Firstly, David roughed out an Ash blank that was slightly larger on half with a step down in the center and then put tenons on both ends. This was then mounted in a double-chuck fashion which allows the work to be aligned exactly right from the start.

Whilst set up on the lathe, he then cut the two parts in half with a parting tool and a Japanese saw. It was noted to release the pressure on the tail stock to allow for easier sawing.

Shape the base as per the standard methods and take out the center of the box. David has a small block that has been made up to the correct dimensions to check as he goes which would be handy if doing multiples.

Now, sand any imperfections out.

Remove from the lathe and put the chuck with the lid section on in its place. Face off the piece and then make your rim. This should be a loose fit, but not sloppy. Don’t be too scared to stop the lathe multiple times to check. David then did a rebate on this so that he could turn the lid around on the chuck in expansion mode.

Shape the lid as per profile that is pleasing. Keep in mind when getting close to where the finial will sit that it is possibly better to go slightly larger (around 15mm max), then this can be blended in with the finial attached later.

Face off the post for the finial and drill a 7mm hole approx. 7mm deep.

Now, with a chuck with smaller jaws, mount a piece of Pacific Ebony and turn into a finial. It was said that if you are unhappy with your finial shape, throw it away. It is only a small amount of time spent on it, so is better to redo than have regrets later.

The attachment of the finial is done whilst the lid is on the lathe. David has made a small jam chuck that will take the point of the finial, which means that your finial should be pretty close to perfectly straight. It was whispered around that a few people had glued theirs in crooked. 😊

Although a very sharp point on a finial looks lovely, if you are worried about safety of children, it was proposed that you could put a small sphere at the highest point.

Thankyou David for your presentation. I am sure we will be seeing a few renditions of this box on the final meeting this term.