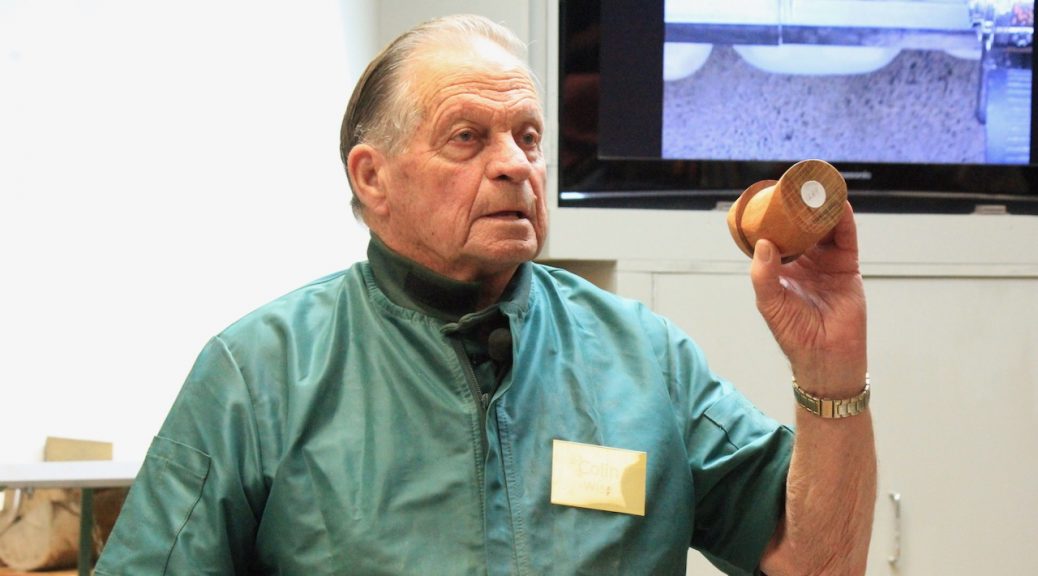 Colin opened his demo by displaying a range of lidded “boxes” he has made over the years. There was a set of 7 boxes, each one smaller than the next so they could be stacked to fit into the next largest box. Like Russian dolls. Apparently the world record for the number of boxes that can be made to stack in this way is 33. Terry has managed to get up to 17. Can anyone meet the challenge and beat that? The walls have to be so thin that turning must be done carefully with accurate measurements. Colin made his septet of boxes early in his turning career. He also revealed a sample of the finished product he was aiming to turn this evening and showed off a square box beautifully made from laminated timbers.

Colin’s demo started with a block of bird’s-eye pine, about 60 mm square and 180 mm long. He had previously rounded off the block and cut an off-set spigot in one end about 6mm from the true centre of the box, with the equivalent marking at the other end for holding with a steb centre at the tailstock end. With the block held by the offset spigot, he drilled a hole with a 32 mm Forstner bit, drilling slowly to avoid burning and ensuring the depth was sufficient to leave a box bottom about 5 to 8 mm thick. Drilling avoids having to do any hollowing.

[HANDY TIP No. 1: Colin uses boelube on the drill to keep it moving and avoid burning. Always drill slowly with Forstner bits and frequently extract from the hole to clear shavings.]

Once the desired depth is reached Colin marked that level on the outside so later he would know where to part off the lid of the box. He also marked the position of the curves he wanted to apply to the box. Next the box is de-mounted and a plug inserted in the hollow (top) ready for shaping and to give the box its unique (but not altogether beautiful) off-set shape. Now the block is re-mounted in the off-set spigot with the steb centre holding the off-centre mark at the tailstock end marked in the plug. The shaping must be done carefully with frequent checks to ensure the cuts are not encroaching on the 32 mm hole. If this happens the box will become a sieve.

[HANDY TIP No. 2: Off-set turning can be hazardous if anything goes wrong, so make sure you wear the full face guard and keep fingers clear of the unevenly spinning work piece.]

The box is demounted again and mounted in the real centre ready for parting off the lid. Before completing the cut, turn the rebate in the top of the box ready to take the lid. Also do any finishing work needed at this stage because once the lid is parted off it won’t be possible to do this.

After parting off the lid Colin completed shaping it to the desired form and cut the rebate to fit the box opening.

[HANDY TIP No. 3: When turning shapes, rebates, etc., to fit other shapes and rebates, keep checking for a good fit as you go along. Very easy to take off too much and lose a tight fit.]

Great demo from another of our turning gurus. Many thanks Colin.

— Written up by “Club’s Most Consistent Volunteer Reporter” Murray Wilton