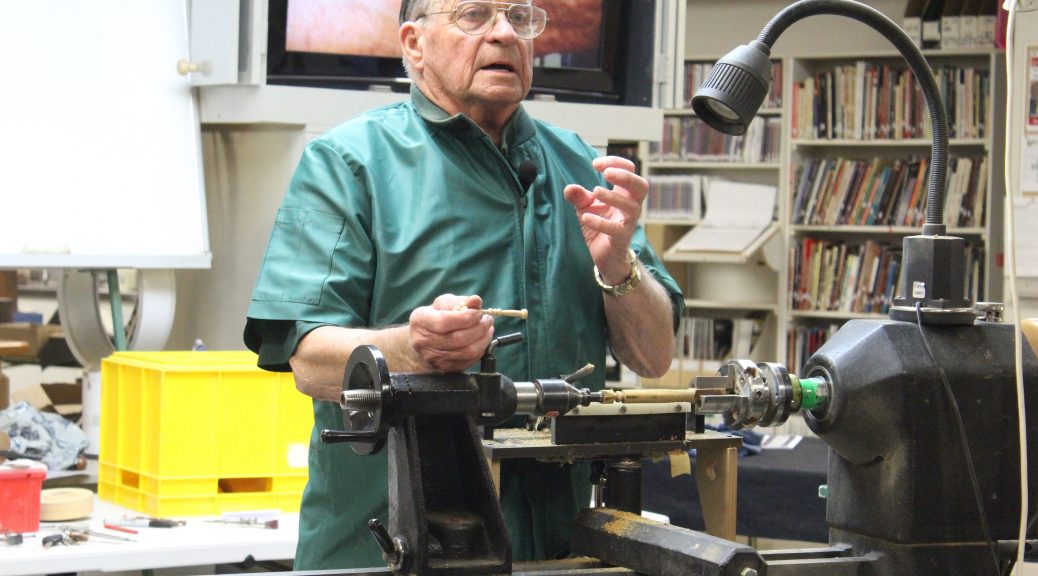 Colin commenced his demonstration with a quote from an article he had read : “With time, you can hear as well as see when the wood is being cut with precision”. Colin referred to this quote while turning his demonstration pieces to highlight good tool work.

A tip for the meeting related to using a power sander on gummy wood where the sand paper quickly gets clogged with dust and doesn’t cut any more. Spray the sand paper with Ondina oil; a brush with a bronze wire brush will remove the oily dust and allow continued sanding. That is worth a try, if it reduces the need for frequent replacement of clogged paper, it will be quite a saving.

Colin then demonstrated the use of a copy machine to turn a bobbin which is used in making lace by hand. He has made 150-200 of these in the past. People making lace, use in the order of 40-60 bobbins at a time.

Colin has made the pattern template and copying jig himself.

Now to the subject of the demonstration; “Inside the Square”.

Colin produced two pieces of wood cut to the shape of a pyramid, one larger than the other. The larger had a flattened top with a recess in it for a tenon/spigot or to be used as a chuck bite, the smaller pyramid had a chuck bite turned in the base. He then proceeded to turn the pointed end of the smaller pyramid into a spigot so that the two pieces fitted together neatly. Using that spigot to hold the piece, he then turned a bowl in the bottom or base. He repeated the process of turning a bowl in the base of the larger piece, fitted them together, and he now had an example of “Inside the Square”.

Certainly something different, thanks Colin.