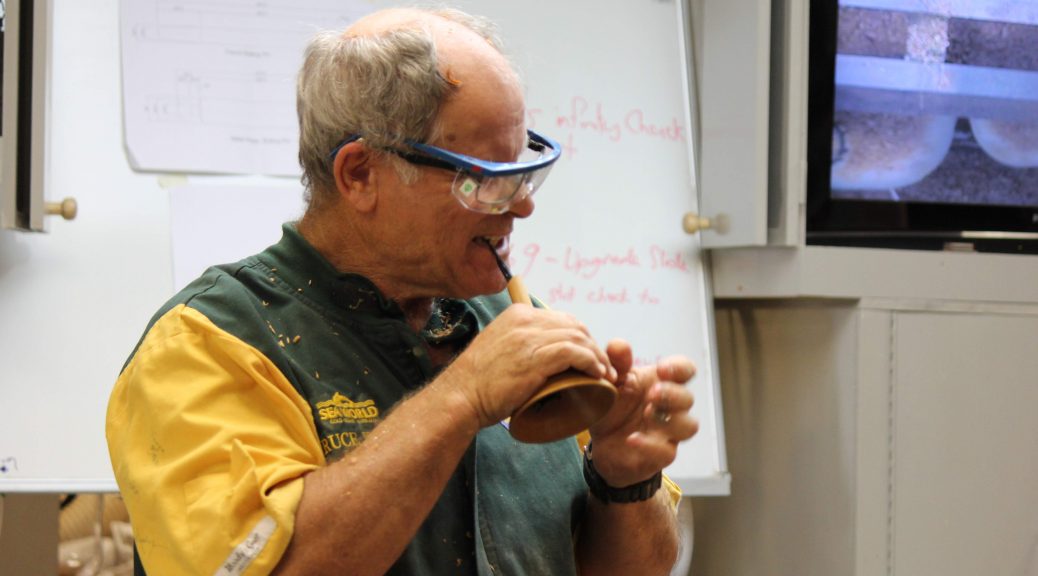 Bruce’s subject was advertised as “Bits & Pieces”, which was meant to be “From the Kitchen”, so the topic became useful kitchen devices. The first was how to make a kitchen funnel, to be followed by two rolling pins (a Baker’s Rolling Pin and the Italian job). But time only allowed the funnel to be made at the demo and we were treated to another master class punctuated with pearls of turning wisdom. In fact, Bruce began with a discussion of various chuck options, demonstrating the advantages of the Infinity chuck which allows jaws to be replaced with a flick of a special tool. No more fiddling with screws and worn-out allen keys.

Back to the funnel. Bruce loaded a block from a large kauri post on the lathe between steb and live centres and turned it to round in a flash, slicing though the timber like butter. Then he formed a 60mm spigot 30mm deep at one end so that it could be firmly held in shark jaws. Once mounted in the jaws (tube end of funnel) he started forming the outside of the funnel, working at 2000rpm. The exterior wide end of the funnel is 100mm diameter and wall thickness 5mm. Marking these dimensions with a pencil, Bruce commented that he had glued a magnet to the pencil so he could place it on the lathe body where it was always handy. (Helpful Hint Number 2.) The triangular shape is formed to 60 degree angle at the (triangle) base. Bruce uses a 60 degree template to check the angle, forming the outside to a depth of about 80mm. (In other words, an isosceles triangle with base 100 mm wide, base angles 60 degrees and altitude 80 mm.).

Once the funnel exterior shape is achieved, Bruce proceeds to drill an 8mm hole through to the bottom of the triangle. He calculated the depth accurately by working out that each turn of the tailstock would bite 2.5 mm into the block, meaning 30 turns would get him to 80 mm. Now he hollows the funnel using a 35˚ bowl gouge, drawing it across from the centre hole in careful sweeps, rubbing the bevel (Helpful Hint Number 3), checking the angle with the template and marking high spots with his magnetic pencil. Reaching the bottom of the hole, and satisfied that the angle and thickness are correct, Bruce sands the inside using cloth-backed sandpaper which can be folded to a point to get into the interior apex of the funnel. Finally with both inside and outside sanded up to 400 grit, Bruce finishes with sanding sealer.

Now he drills the 8mm hole the rest of the way through the tube end of the funnel, taking care not to have the drill chuck scrape against the finished inside walls. To do this he had to progressively pull the drill out of the chuck until it was almost wobbling in space. A drill extender might be the answer.

The final part of the project is to form the outside of the tube end. Bruce uses a 60 degree rubber cone mounted at the tailstock and brought up firmly to the funnel end. The tube is finished to 16mm so that with the 8mm hole it leaves a 4mm wall. To ensure there are no disasters Bruce uses digital vernier calipers and constantly checks the 16 mm diameter for the whole length of the tube.

For this final phase of the project, Bruce changed to smaller jaws (easily done with the Infinity chuck), and mounted a wooden jam chuck with an 8mm “peg” and a small rubber washer to push into the end of the tube and hold it firmly for final finishing work to be done. He advises working gently at this stage to avoid the work flying off the lathe as it is not actually gripped at any point by chuck jaws. For final finishing use the skew chisel if you are brave enough. Then sand off, finish with sanding sealer and polish with wax by your favourite method. Lastly the tube is cut off at 58mm long. About to slice it off at right angles, Bruce was asked by a member whether it would be better to cut the end on an angle to assist with clean pouring, so he obliged.

In answer to a question whether the funnel could be used for liquids like wine, Bruce suggested that the funnel is better suited to fine grain foods, like salt, sugar, etc. Constant cleaning after using liquids would damage the finish. In the end, items like the wooden funnel make nice decorative additions to a kitchen, especially if exotic timbers are used and a range of sizes made.

Well done Bruce. Another consummate performance. Only wish there had been time for the rolling-pins. Maybe another demo later?