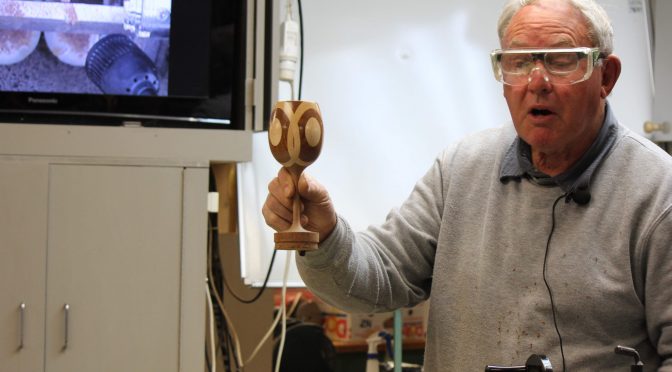 Cam’s subject was actually a segmentation goblet with angled lamination, but the process of planning and preparing the materials and tools was well illustrated. Starting with the story of his first introduction to SAWG and woodturning eight years ago, Cam brandished a massive 25 mm bowl gouge he had been persuaded to buy at Carbatec and suggested he might turn a delicate goblet with it. A little like using a chain saw to cut match sticks.

Cam emphasised that goblet-turning is fine work requiring scrupulous accuracy, and that he personally works to tolerances in the 0.00237 range. (How do you measure that?) The point is that for this kind of segmented work even the starting block has to be dead accurate so that the diagonal end measurements are precisely the same. A little outside the tolerance and the resulting patterns will not align correctly.

Contrasting timbers are needed in order to get the best outcome with the final goblet pattern. Cam was using maple inserts in a block of dark wood (not sure what it was).

As with all projects it is important, Cam teaches us, to start with a plan drawn to scale. The first task is to cut four slots in the bowl end of the goblet block using a drop saw. To prevent the cut intruding into the stem of the goblet Cam has devised a jig which keeps the block sufficiently far from the saw backstop to prevent this happening. All meticulously measured of course. The wedge shaped cuts are to take the maple lamination inserts.

CC Hint No. 1 To prevent the saw blade gripping the timber at the end of the cut and damaging it, always turn the saw off before lifting the blade from the work.

The 10 mm maple inserts are then glued into the cuts and allowed to dry before turning begins. They must be tight as or, in Cam’s inimitable words, “they will wobble round like a how’s your father in a shirt sleeve”!

With the bowl end of the goblet already turned and mainly finished with the Beale system, Cam demonstrated how to finish the stem of the goblet. He uses a jam chuck in the goblet bowl end at the tailstock, and mounts the base end of the stem in a chuck. He set the lathe speed at 800-1000 mm (and couldn’t understand why the lathe wouldn’t start until he realised that Terry S had mischievously turned the switch off while his back was turned). During the demo he occasionally leaned on the speed control dial and inadvertently changed the speed, causing more mirth among the spectators. Using a 55 degree bowl gouge (10 mm, not the 25 mm giant tool!) Cam started working carefully on the stem.

CC Hint No. 2 When working on north-to-south grain timber always work from each end towards the middle to avoid going against the grain.

As the stem became slimmer, Cam’s work became increasingly careful, taking off small bites of timber (more like dust than shavings) to avoid a disastrous jam and a ruined masterpiece. Eventually he got it down to his planned 5 mm diameter and finished with sandpaper.

The final task is to part off the goblet at the chuck end and finish with whatever polishing is called for. If the goblet is to be used for actual wine, finish the inner bowl with polyurethane or lacquer.

For an 8-year veteran, Cam works like pro with four times that much experience. In between the usual banter and good humour, the audience were attentive and went away knowing they had been present at another SAWG class. Many thanks Cam, and we hope you will soon put on the promised class in segmented turning!