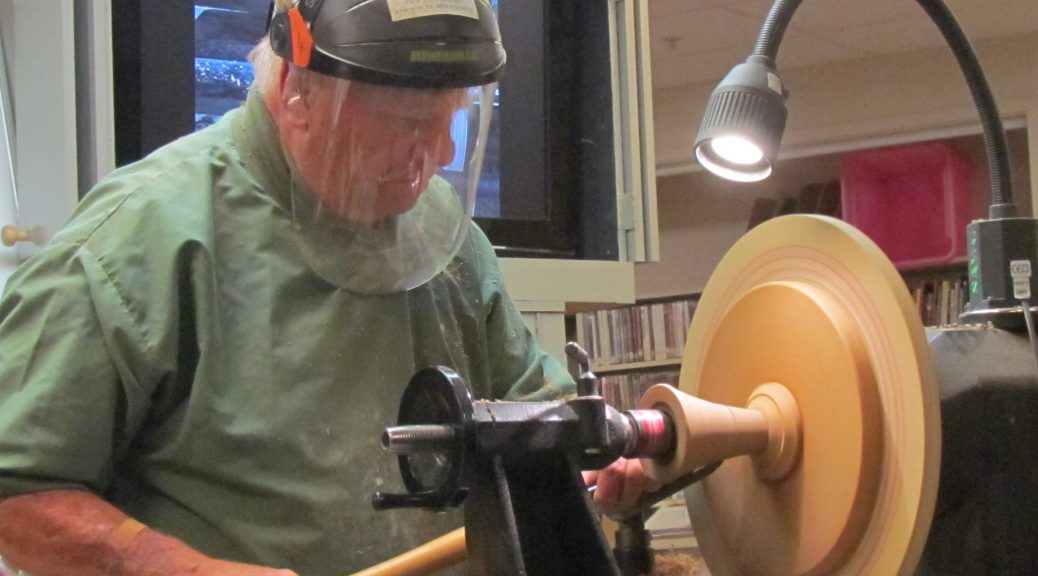 Bob showed members two examples of the cake stand he intended to make; a single platter on a pedestal, and a two tier platter with a central supporting column. The demonstration would be how to make the two tier version.

Bob commenced by emphasising the need to attend to the basics i.e. plan your project. A little planning will make the project run smoothly. He suggested that the platters could be made from recycled cupboard doors or old cabinet sides. The central column was to be held together by a threaded rod so that the cake stand could be disassembled for storage.

When planning platter sizes, remember that a standard cake size is 250mm but can range from 200-360mm.

The central column included the base, a central spacer and the top which could be turned to your preferred shape e.g. as a handle.

Bob had prepared his support column by drilling a hole through his base, centre spacer and top for the threaded rod. A recess was drilled in the bottom of the base to take the jaws of a 50mm chuck and later the assembly nut. The platters had been cut to round on the band saw and a centre hole drilled to take a spigot.

Once the base had been shaped, the next task was to turn the first platter to round. Bob fitted the base to the platter using the spigot and using the tail stock, pressed the platter against a large disc mounted on a faceplate. With the lathe running at a slower speed, this was a quick and effective method of holding the work for finishing.

The centre spacer was turned to shape and the same method of using tail stock pressure for holding the second platter would have been used. However there was a technical problem and the project was not completed.

Thanks Bob for a well planned demonstration.