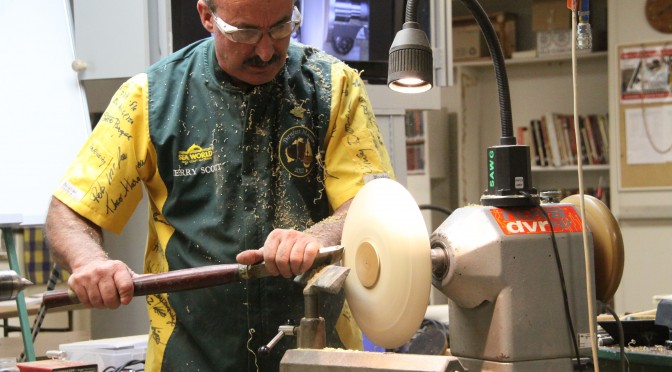 Terry had been asked to demonstrate embellishment of platters. But true to form, he wondered what else we might like to know, and he demonstrated the turning process as well. A platter, he explained, is a “shallow vessel to hold food” which (according to Easter Show rules) has a height (including feet) no more than 20% of the diameter.

Terry mounted a 300-mm disk onto a screw chuck dedicated to platters, with a wide plate for the blank to rest against, a long screw, and a disk used as a spacer for smaller platters. He calls this size a “wedding platter”, large enough to make a statement and small enough for tourists to put in their luggage. His tools were a 35-degree fingernail gouge, a 55-degree bowl gouge, a spindle gouge, and a heavy round-nosed scraper for the final finishing cuts on the inside.

Terry advised against turning a platter with a rim that is flat on both top and bottom, as this is too fragile. Instead, his outside shape was a curve extending from the 75mm foot to the edge of the rim. That foot was used to mount the platter for turning the interior, intending to turn the foot off later. After leveling the surface, Terry emphasised that most texturing of the rim should be done before hollowing. (An exception: don’t use a leather punch when the platter is still on the chuck!) From a point 1/3 in from the rim and moving toward the outside, he used a rocking motion with his 35-degree gouge to turn a series of beads. He then used a variety of tools and products to demonstrate a range of embellishment options, including random holes (to link the rim to the interior which was naturally embellished with borer holes), his own texturing tool to create a rope-like effect on the beads; leather-working punches; gilder’s paste which can be partially sanded off and re-applied using different colours; and other techniques. Thanks, Terry, for a comprehensive demo and an easy style that kept us all engaged and offered something to both beginners and experienced turners. Visit Terry’s Website www.timberly.co.nz to see some of his platters and other work.