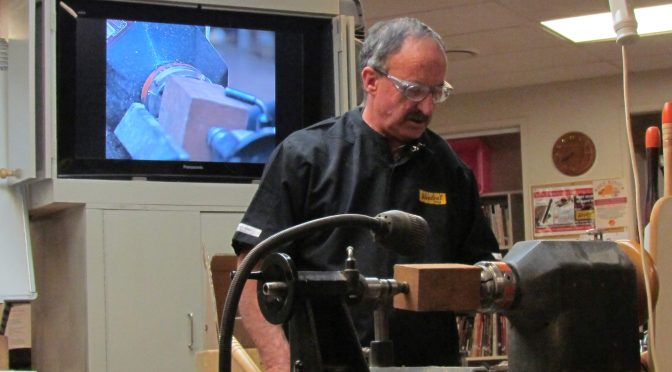 Here’s a turned box with a difference. The lid is a spinning top. Terry started his presentation by showing a boxful of various spinning tops he had made over the years. They ranged in size from tiny tops, designed to be spun by tiny fingers, to a massive example about the size of a discus on a broomstick, which Terry spun using an electric drill to start it. In spinning-top competitions (last one to stop spinning) this massive top will always win because it simply wipes out all the others.

For this demo Terry chose to make the little box with a finial lid that can be spun as a top. Makes a nice trinket box for a child to keep their little treasures in and show off to friends who will be surprised to see that the lid is a spinning top. Mounting a suitable sized block between steb centres, Terry rounded it and fashioned a spigot on each end. He parted off about halfway to produce sufficient for two boxes and set one end in the chuck with a steb centre holding the other end in the tailstock. Next the tailstock end was turned to a suitable shape for its dual purpose. This is the bottom end of the lid (or top). It included a rebate for fitting to the box as well as enabling it to be jammed so the upper side of the lid/top can be turned later. The lid/top was parted off with sufficient depth to allow for shaping the upper end.

The box was then finished and, as Terry explained and demonstrated, this is the time to add any enhancements, such as grooves around the circumference. In this instance the groove was filled with metal paste, made from metal powder mixed with super glue, a talking-point on its own for the future owner of the box. (Check with Terry for the source of the powder.) After hollowing out the box the lid is jammed on so that its upper part can be finished and a finial added. Made from African ebony or old black piano keys if you can find any.

For much more detail please use the the following link to see an 18-step explanation of the whole project:

Also, consult the book “Tops” by Michael Cullen (not the former Finance Minister).

Another interesting project to add to your collection, which could be made in time for Christmas presents or Kids First projects. Many thanks to Terry for another excellent presentation.