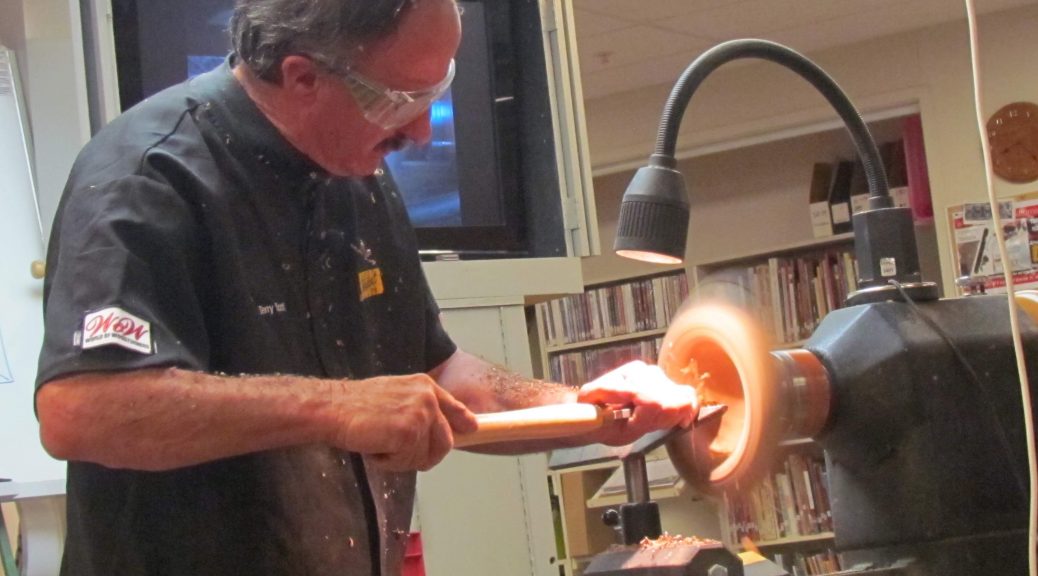 Terry used a square piece of wood and found centre using the usual cross lines centre was punched with a Phillips screwdriver which allows the 7 ½ mm drill to not wander. This is then mounted on a screw chuck.

Terry then made the made sure that the tool rest had no nicks in it he used a sanding pad and polish.

The drop wings are formed first and a 50 mm spigot is formed in the middle to reverse chuck. If desired make sure that the piece will sit on the wings not on the base. The chisel used was a 10 mm bowl gouge with swept back wings this is advisable so that the chisel can be turned without catching the bowl in the middle when doing the underside of the wings.

The curves can be checked by laying a glue stick across it and seeing if there are any gaps. If planning to do 3 feet use a larger 75 mm chuck to make a larger ring the bottom of the bowl, and carve feet when finished. The centre of the spigot was marked with the long point of skew chisel for ease of centring when turning the foot of the bowl

Draw a series of lines approximately 4 mm apart from the base of the bowl, vertical gridlines can then be put in using the indexing feature of the lathe. These lines will be used as guides when finally decorating the bowl.

Reverse the bowl onto a 50 mm chuck and cut the wings from the centre out, hollow the bowl and cut a shoulder in order to fully rub the bevel. Form a nice curve so the wings flow into the bowl.

Terry then showed us various ways of decorating the bowl, the inside could have a series of beads to simulate a splash and other decoration to make waves in the wings, using a mini Arbortec to carve the lines. Terry then sanded up to 240 grit on a sanding mandrel.

Other decorations can be done with a wire brush on a drill, a Dremel or a pyrography machine. Using a knife edge on the Burnmaster, Terry showed us how to highlight the grain lines in the wood. Colour can then be applied (Terry prefers black) he uses acrylic paint, Kiwi boot polish or gilders paste. Terry then showed us how he carved feet using a mini Arbortec.

Thank you once again Terry for a very informative and interesting demonstration.