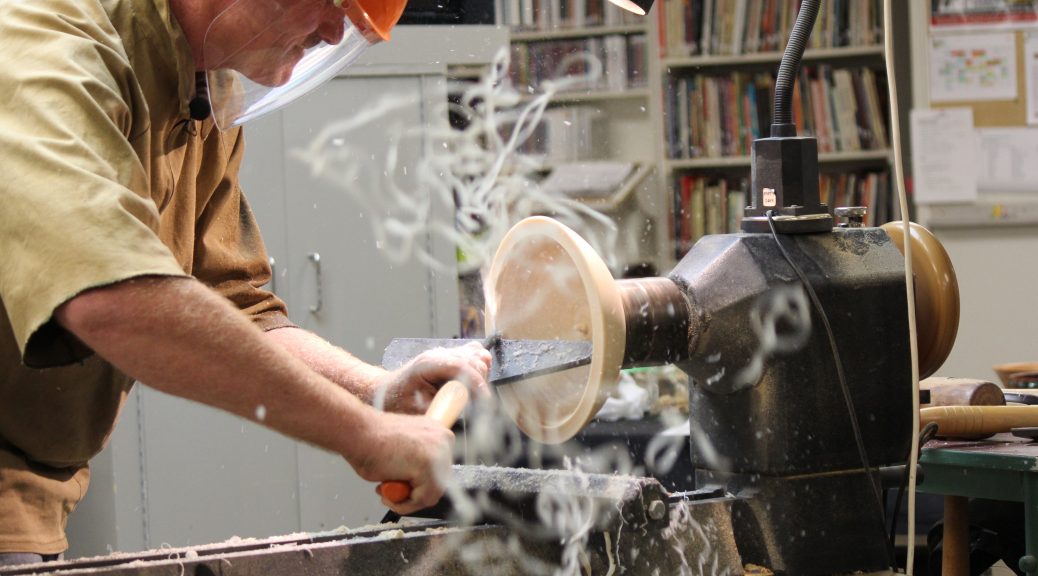 Richard began by showing us all some of the wet turned bowls he had done over the last 4-5 years. He pointed out how he had left the spigots on them and also showed us the second spigot on the inside and explained that it was there in case the one on the bottom had moved too much.

He turned the blank to shape and turned a spigot on the bottom to the required size, it was great to watch the shavings flying off the chisel and into the second row, the wood was really wet so the guys in the front row got an unwanted shower

Richard explained that you can turn the blank to the final shape if you want but that this was not necessary, again he had shavings flying off the chisel and into the audience in a well controlled demo of good tool technique, once the piece was shaped on the bottom he took it off the lathe and removed the face plate in preparation for turning the inside

Richard talked about the shape of the inside and the reasons for having a nice smooth sweeping curve, mainly for ease of sanding and finishing

He gave a good explanation of why he turns the 2 spigots, one on the bottom and one on the inside to the audience as an answer to some great questions

Richard then remounted a walnut bowl that had been turned back in 2014 to demonstrate the techniques discussed in the audience. The spigot was returned to the required size using a draw cut and the bowl was ready to be returned to the desired shape