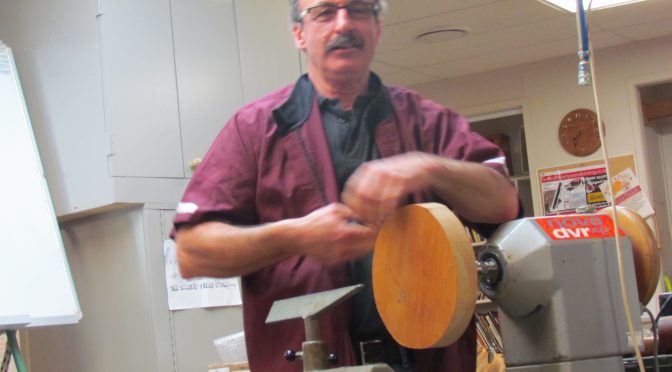 We had another excellent demonstration from Terry Scott . The theme was pyrography, but you know that you’re always going to get more with Terry.

Terry began by demonstrating shaping the outside of a bowl and getting a smooth finish (before sanding) with a shear cut using a skew. This technique will probably take some of us a fair bit of practice and a few dig ins to perfect. For his “craft” bowls Terry uses the spigot as the foot of the bowl and turns the foot nearly to completion. When the bowl has been completed he just turns it over, uses a Steb Centre to hold it against a face plate, and curves the sharp edge of the spigot. The clever part was how the centre of the foot was turned out to the size of a Paua dot or a Penny. The marks of the Steb Centre were then covered up with a value add process and didn’t need to be sanded out by hand afterwards.

Terry’s carved and embellished pieces always look as if the pattern has happened randomly, but there is a bit of planning and preparation which goes into that random look. Terry uses the indexer on the lathe to give even segments to his patterns. This prevents working around the bowl or patter and having an uneven gap left at the end. He moved on to Pyrography and showed us various methods of producing patterns using both commercially available tips and custom designed tips made with Nichrome wire. The variations are only limited by your imagination.

The final piece of the puzzle was supplied by colouring the various embellishments. Terry’s choice of colouring medium is guilders paste. By adding different colours or by putting colours on top of each other he was able to get some stunning effects which really added to the overall “wow” of what Terry demonstrated. This demonstration was everything we have come to expect from Terry. There were lots of ideas for decorating bowls and platters using texture, burning and colour. Everyone would have gone home with something to inspire them.  Thanks Terry.