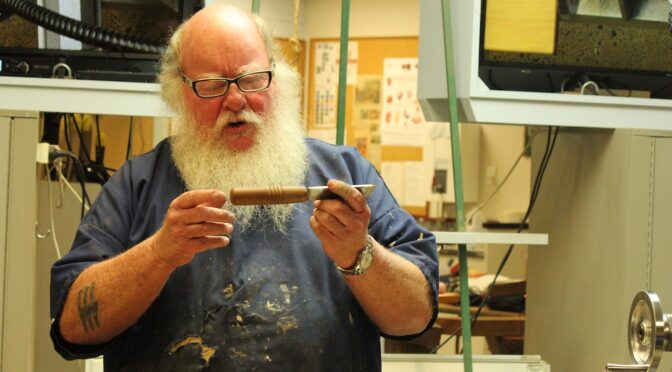 We had an interesting and varied demo from Michael Bernard on the 10th March. Firstly Michael had brought along his knife sharpening equipment and we all had a chance to have our knifes sharpened. It looked easy enough but you soon saw there is a skill to it.

During the demo time Michael showed us some of the things he had been turning lately. The traditional Maori flute was beautiful. Its length of wood approximately 15cm long which had been turned so it could be drilled out with a 18mm drill piece to leave a wall thickness of approximately 3mm. Holes were then drilled with 6mm drill bits.

Spurtles was the next object he showed and I learnt they are the shape they are so porridge can run off them easily compared to a spoon while cooking. Also he showed how a dowel shaped stirrer was better for mixing sour dough then a spoon shaped utensil.

Michael has made a couple of chess sets in his time and showed his latest King and Queen. He then went on to turn the queen for us.

The big surprise was to learn how thick a piece of gorse can grow! I having grown up on a farm, with gorse eradication a continual thing. The tractor was quickly deployed with the slasher when gorse showed. I acquired a piece and will turn a bud vase for my retired farmer father; but I don’t think I should tell him the pest I made it from.