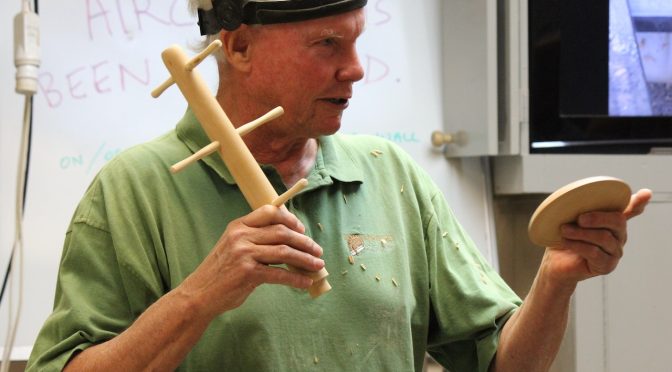 Wig stand to a Christmas gift: a matter of measurement.

A Christmas miracle was performed by Lindsay in front of a very attentive and interactive audience. Lindsay was able to turn a wig stand into a coffee cup holder. This tree like cupholder was developed using two important measurement systems imperial and metric.

In short this demonstration could be called a struggle of imperial versus metric measurement systems for gift construction. Lindsay was able to have the use of tech features magic box in the production of this work and the associated gifts. A central direction was to use recycled wood measured primarily in the imperial system. The writer supposes that this was because of the use of recycled Kauri.

Measurement system: was used to determine the size of the base, the joining spigots, and the vertical stand in the coffee holder pegs. This is achieved through a concise use of the imperial measurement system so that the hanging cups did not neither touch the ground nor bump into each other.

Drilling onto square piece made the formation of the cupholders pegs accurate and facing in the correct direction. A process that gained the audience approval and raise comment of rounding off the square piece. Rounding off was a mixture of spindle roughing gouge and skew. Sanding was simple with the finish either being lacquer or paint. Positive thing about Lindsay’s processes is that the mechanisms for finishing was simple and lathe based i.e. the Jacobs chuck and the sanding mandrels. The writer was not sure whether these were measured in imperial or metric. There were some extensive audience discussion as to the exacting system of measurements. This is particularly applied to the formation of the cup holder pegs made from 10 mm (metric measurement) dowel.

Coffee cup pegs: Lindsay did mention that there are a number of methods for getting dowel down to the size, understood to be 9.25 mm (metric measurement). There was mention of Mac’s sharpened spanner system. However the more accurate measuring persons within the audience felt that this was difficult to maintain a measurement such as 9.25 mm measurements.

Lindsay’s application method allowed for slight inconsistencies in measurement by the use of a 12 ounce (imperial measurement) hammer i.e. hammering it in.

Gift two: The associated gifts were made with very similar precision. The advantage of being that the prime piece for the base of gift one: a mouse, was variable. There was a question raised in the audience as to whether this was imperial variability or metric variability. Lindsay resolved this issue by making one body and imperial and another body and metric. The writer is unsure which was which. Small important notes were; sealing the mouse before making holes for the ears and whiskers and tail. Ensuring that the hole for these items was of sufficient size in this case 3.5 mm (metric measurement) and the use of superglue to finalise the attachment.

Gift three: a mouse on a door wedge. Lindsay used his magic box and showed how the flat surface of the mouse can be dowelled to the angled surface of the wedge. Lindsay did comment that the angle of the wedge is up to the maker and the size of the piece of wood been used. However he did indicate that this could be done in either imperial or metric.

Gift four: Raupo rush poles. A garden implement that can be made in both measurement systems. The steel rods can be purchased and cut source of required. Lindsay did note it is important to drill the bass part of the Raupo rush to the same size of the rod. Again in this case it was a metric measurement is that with the style of the steel rod purchased.