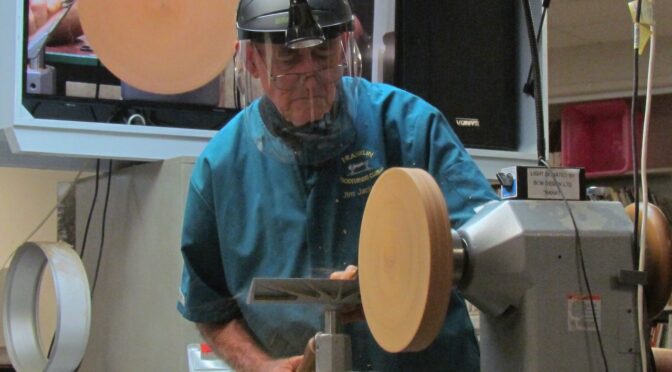 Jim Jackson started out on a mystery tour with recycled wood. The wood was prepared in advance, initially an unnamed mystery piece that was directed towards a formal, traditional shape.

Jim started shaping up the first part of the mystery; a platter the with a central hole. Commenting on sharp tools, and the need for regular sharpening preparing the spigot for a large Titan 3 Chuck initially set up on the tailstock. The end product was still, a remaining mystery. However, Jim did allude to the fact that can be made with same or separate types of wood. The overall focus was as an exercise in making plates, possibly platters, which would, later, with measured centre hole added, be teacake platters.

There was an emphasis of the a need to make the platters light in both look and lifting. He did however allude to the fact that the shapes need to be similar, uniform and equal thickness.

The unveiling of the mystery: a three tier, central pillar, teacake holder. There was a question as to whether this three tier holder would handle club sandwiches, high-calorie assemblages and cream cakes. The holding ability was effectively illustrated later in the demonstration.

An important feature was the frequent measurement of the central holes on the upper tiers and the rebate for the central pillar. Overall, there was a regular requirement for measurements of all parts of this teacake holder. Jim put this forward as a spindle turning exercise and in the same vein as the central pillar for the wig stand (see SAWG project).

There was a recommendation to check the actual fit of the items and to remember the order in which assembly was undertaken. Jim noted with a chuckle, make sure that you have the order of construction in the correct manner:

Form of the object and how it looks: the connecting mechanisms and holding parts measurements aside, the Three Tier Teacake Holder is dependent on looks. The ratio between the three layers needs consideration and planning. The height between the platters is similarly important.

Jim’s mystery project is utilitarian however the final product sits up front.