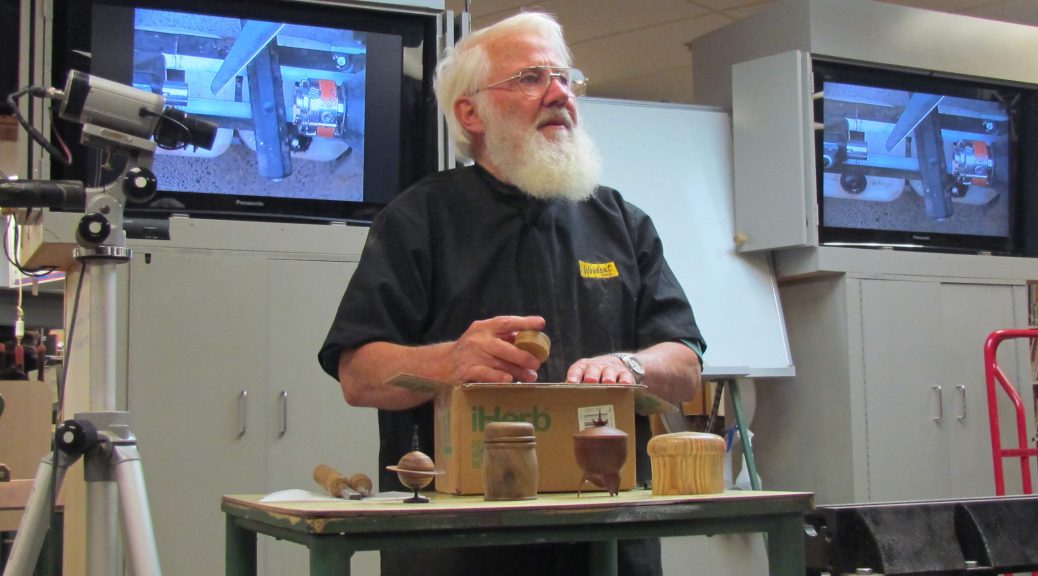 Dick Veitch gave us a demo on making threaded box lids. After volunteering to write this report I did a double take when he pulled out gadgets and jigs a plenty… but in Dick’s style he soon had everything step by step and slowly everything unfolded in front of us.

There are two main ways of making a thread box thread. One with a hand held tool. The way he showed us was with a setup attached to the lathe bed with a cutter and using a index system. He explained the types of wood suitable for the best results.

I will give the basic outline of what Dick showed us as I am sure this would become a booklet not a report if I detailed everything. Though don’t confuse this with it all being “too hard”, I am sure with practice we could be making threaded jars for our honey dippers in the near future.

Dick used Taraire wood and turned the basic shape of the outside of his box. Then used a forstner bit to take the box centre out. A large wooden jig was placed over the tailstock handle with its own extra large handle, to help keep a more consistent turn of 230r while drilling. A consistent turn helps for a better drilling result. He used Boelue lube on the bit to reduce the squeal.

To prepare for the actual threading, an area of wood was removed from the top outside of the box to allow for the threading depth and for the lid of the box to be threaded over later.

He attached onto the lathe bed the main cutting jig with a thread cutting bit attached to the head stock. The main cutting jig with a 10tpi thread, which the box was attached to, was wound into the headstock to cut the thread into the wood. After a ‘once around cut’ the jig was adjusted using the jigs index plate and another cut made around to add another thread line. The index plate was adjusted 4 times for 4 cuts at 90°. In the end giving a ‘4 Start Thread’.

Then the inside of the lid on the box was prepared and the threading done on it.

On completion of the threading and the box, Dick with his router made a fluted edge around the edge of the lid to hopefully show people using the box, it was a screw lid and not a pop lid.