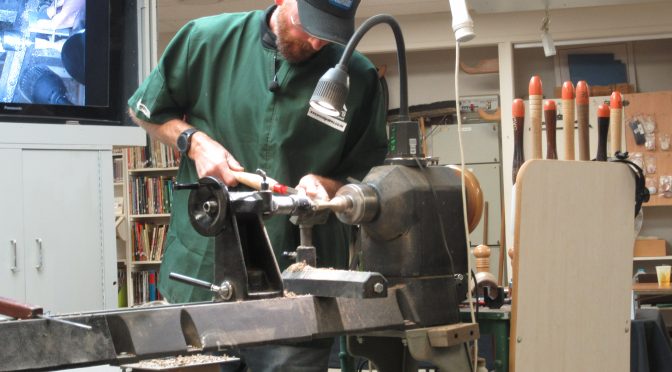 Dave opened with a promise that his demonstration would be the best attendees had ever seen! Or:- maybe not. But whatever, as he had a reputation for being a stirrer, he expected the same but to remember, that he is very sensitive and easily hurt; yeh right!

Dave’s daughter had found a kina shell (sea egg) on the beach so Dave had turned the shell into a very lovely delicate hanging ornament . The demonstration was how he had accomplished this feat.

To start Dave had prepared a cylinder about 150mm by 70mm mounted in a four jaw chuck with the tail stock in support. The first activity was to shape the portion nearest to the tailstock into a stylised representation of a kina. Somewhat bulb shaped. The tailstock was then removed and a 9mm holed bored right through the piece.

The 9mm hole was used as the starting point for hollowing the bulb with side walls of approximately 3mm. Lo and behold, the hollowing was done using a Roly Monroe hollower, strange that, maybe it is because Dave sells them, of course this warranted a few jibes from the back row audience.

After hollowing the bulb was parted from the stock. Dave had made up a threaded jig which was mounted on the head stock with an old 9mm drill bit protruding. On the tail stock Dave had turned a sleeve to fit over a stebcentre. The bulb was now held by the 9mm drill and by the wooden sleeve on the tail stock. This allowed Dave to finish the end of the bulb.

Now for the finial. When making a finial, use hard wood or tight grained wood.

After turning the finial blank to round, Dave drilled a small hole in the end. The tailstock was then brought up to the stock again and the piece re-turned. This is a trick of the trade to ensure that the finial is perfectly round and there is no wobble when the tailstock is removed. The shape of the finial is whatever the turner chooses, but remember to measure the depth of the bulb so that the shape fits nicely into the end of the bulb. Form a 9mm tennon on the end of the finial for fitting into the bulb.

To complete the ornament, a piece was turned to fit the top of the bulb and shaped as an attachment point for hanging.

As a grand finale, Dave produced three examples of beautifully finished hanging ornaments. A very informative demonstration of something different for a Christmas ornament.