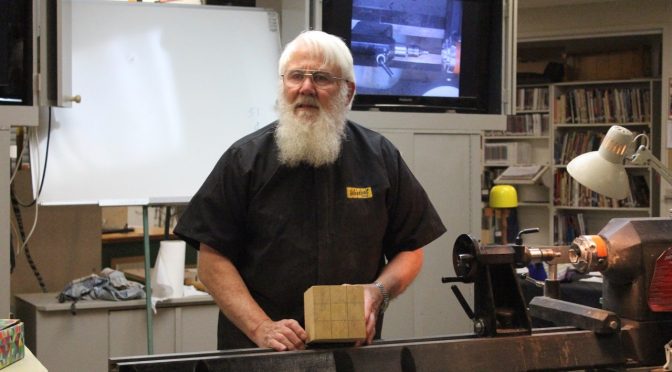 The term project for the guild members is to produce an item from a 125mm cube but true to past form Dick was not content with producing 1 item he made 6.

The block of wood was 125 x 125 x125mm Kahikatea (Dacrycarpus dacrydioides) White Pine. In addition to the block of wood Dick had a block that was cut into 9 pieces 41x41x125mm, give or take a fraction, and his Magic Box and wand. The pieces are held by the square end for spindle turning, long grain.

The piece was held in the chuck with a Steb live centre in the tail stock, a practice used in all of the 6 demonstrations, whilst using the roughing gouge to round and roughly shape. The tail stock was removed to ease finishing with either a spindle gouge and/or skew. None of the pieces were sanded as Dick’s skill and technique resulted in clean surfaces.

The initial roughing process didn’t go without incident. The piece was not securely locked in the chuck and went walk about. Once back on the lathe and back on track the ball, 10mm in diameter was put in the Magic Box followed by the Cup. The Box was tapped with the wand and low and behold the finished toy, complete with ball attached with string was revealed. 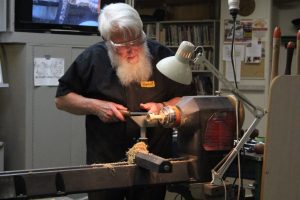 2.   SANTA TREE DECORATION or was it a selfie? It is also as per that in the Club Projects.

This time Dick demonstrated that by putting masking tape on the tool rest and marking where the cuts were to be made saved time.

Once the Santa was finished it was parted off, close to the chuck, cutting a slight concave in the base. The Santa went into the Magic Box and tapped with the wand and low and behold the finished Santa, complete with beard and red and white clothing was revealed 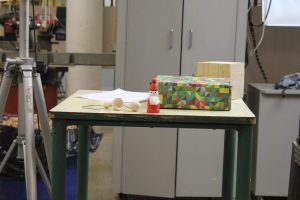 The cone shape was roughly formed with the roughing gouge. With the tail stock removed Dick proceeded to cut 4 cones with the skew, with each getting wider, as he worked from the top of the tree toward the chuck. Care needs to be taken as the initial cuts forming the sides of the cone are not supporting the bevel.

After the cones are cut a trunk is formed with the parting tool and a base made. The Christmas was finished and parted off, close to the chuck, cutting a slight concave in the base. It too went into the Magic Box and tapped with the wand and low and behold the finished green tree was revealed. 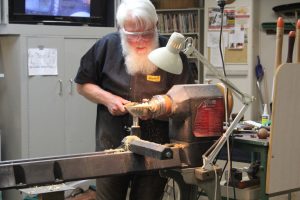 4. A real challenge –  TEA LIGHT DECORATION using 4 of the pieces together for Inside Out Turning.

The key to the success of this is all 4 pieces being dimensionally equal.

In Dick’s demo the pieces are not glued but held, as a “block”, 80×80(indicative) in place between 2 chucks. This requires a live centre in the tail stock for 1 of the 100mm chucks. The wood between the chuck faces is divided roughly into 3. Mark all 4 faces with the lines so they can be clearly seen when the piece is turning.

An alternative to using 2 chucks is to use hotmelt glue on the ends only, firstly joining 2 pieces to form 1 of 80 x 40mm then join these, again with hotmelt on ends only. Carry this process out using the flat surface of your lathe bed. Wrap duck-tape around the glued ends and turn using spur drive and live centre.

Round the centre 3rd and ensure the sides are square.
Cut cove with a deep vee in the centre but don’t go too deep as you need strength for when you are turning the outside. Sand and finish.

Separate the pieces and reassemble so cove is on the inside and permanently glue. Keep glue away from inside so when assembled glue is not squeezed onto finished surface. (If using alternative method of spur drive and live centre turn a chuck bite and remount into scroll chuck.)

Remount and turn the outside to the desires profile. It too went into the Magic Box and tapped with the wand and low and behold the finished decoration complete with Tea light was revealed. 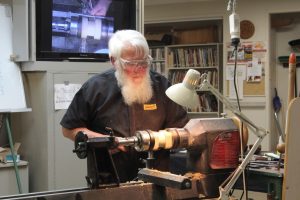 5. HONEY DIPPER as per that in the Club Projects.

Considered by most to be the most useless addition to your cutlery draw was put in the Magic Box and tapped with the wand and low and behold the finished item.

6. The final demonstration had us all wondering “What the Hell”.

This time, after roughing down to a round, Dick demonstrated that by putting masking tape on the tool rest and marking where the cuts were to be made. From the tail stock end and the measurements were 15,10, 15, 25.

The remaining wood was hollowed to a depth of 23mm with a flat bottom and straight sides. The mouth was rounded with a bead produced on the outside lip.

A stem, like found on a wine goblet, complete with base was formed and parted off, close to the chuck, cutting a slight concave in the base. “It then went to the bandsaw” then into the Magic Box and tapped with the wand and low and behold the finished item – a doll, complete with hair courtesy of Dick’s dog, sitting in a chair was revealed.

A challenging demo if ever there was one. 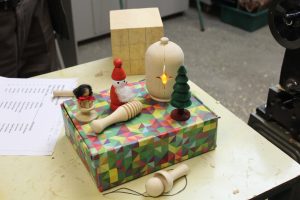